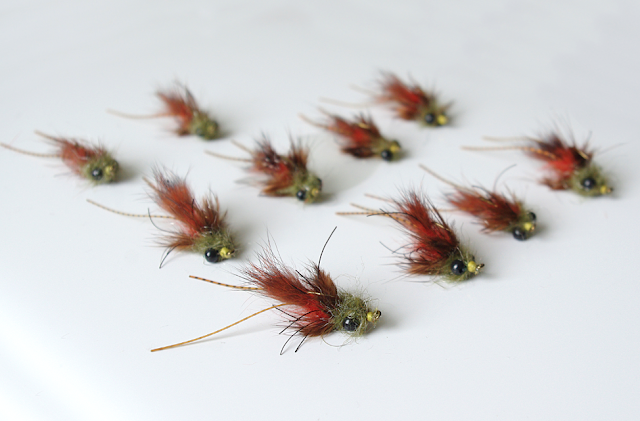 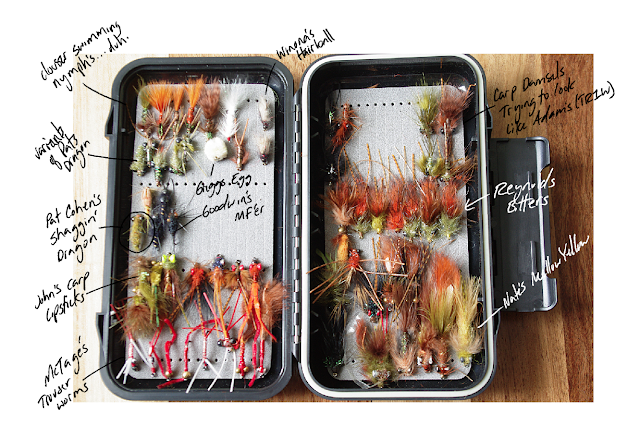 Here's a look at the condition of my carp box. The chicken scratch notes indicate the tier or the pattern author. In some cases the original fly from the 2012 fly swap is still in this box. I'm pretty sure I caught fish on all of the flies I received in the 2012 swap. Pats Shaggin' Dragon hooked the most carp lips for me in 2012. What I really like about fishing the fly swap flies is knowing some background about the fly and the tier. Catching fish on so-and-so's fly creates an association. For example, I caught this mean old catfish on Ty Goodwin's Mean Ol' Dirty Frisco (MF'er) and this carp on Pat's Shaggin' Dragon. Both of these guys blog about carp fishing. In this way the fly box starts to connect to other carp fishing  aficionados. And that's cool.

Thanks Trevor for hosting the 2013 carp fly swap! 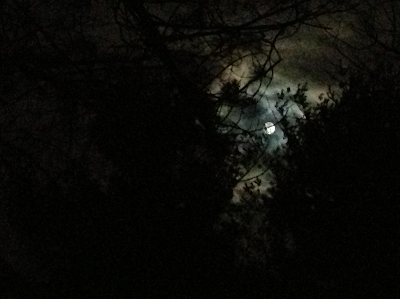 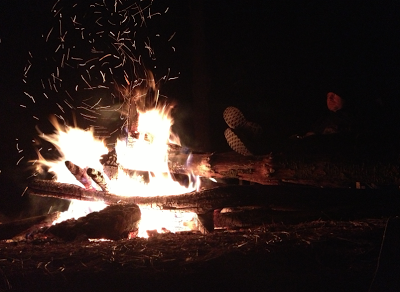 A couple weeks ago my neighbor asked when we're going campin'. I arbitrarily said next full moon. Pics from Saturday night.

Between the Ice. Winter trout. 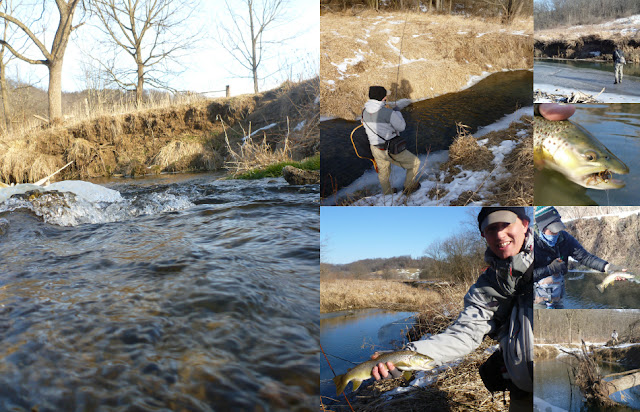 With an extended forecast for frigid temps Andy and I figured we oughta hit a trout stream before the pools ice up. We found some pools completely sheeted but enough fairways to get to a few brown trout. The best water on this stream are the big slower water pools – also the first water to ice up in winter. We tossed buggers and zebras. All our fish gobbled the bugger. Low and slow. Pretty good winter trouting.
Posted by John 3 comments:

Last fall Tim Pearson and I set out to create a video about the in's and out's of proper lining and casting methods for spey rods on small rivers. After I got home and checked the footage I realized 1) my camera ain't that good, 2) my editing software ain't that good, 3) I ain't that good, and 4) Tim can't speak in front of a camera without laughing hysterically. I also figured out what was good: Tim's casting and songs by the Kills. So, without much editing, I present to you: Tim Pearson, spey casting extraordinaire and 'Satellite' by the Kills. Enjoy it for what it is…

Forget what you’ve been told about winter trout fishing; fish a streamer

Put away your 6x tippet, #20 thread midges, micro-indicators and tiny split shot. Walk past that slow glide and toe-up at the start of a long riffle. Tie on a Dirty Mop and swing it through. Swing it slow, twitch it, jig it, let it sit there for a while.

To be fair, this attitude may simply reflect the warmer winters we’ve had over the past couple of years. Last year was remarkably warm and fish were commonly moving long distances to chase down streamers in January, February and March. While this year has been substantially colder than last year, we haven’t experienced many nights of sub-zero temperatures and most days have reached the upper 20’s (at least). Yesterday, Dan H. and I were finding fish (both browns and rainbows) in the riffles and getting them to follow streamers into the shallows.

Dan and I have spent a lot of time fishing the winter season in Minnesota. Back in the day we fished in some very cold conditions (highs in the upper 20’s) during cold winter seasons (these were typically the warmest days of the winter). It seemed like all of the fish were hanging out together in large groups in the slow glides and deeper pools. It was pretty easy to see them and take them on a midge fished deep. In the last couple of years I just have not seen fish hanging out in these large clusters. Has anyone else experienced such a shift in fish behavior and distribution during the winter? Have you modified your tactics? Is this one silver lining of climate change?

Or, will fish take streamers day in and day out regardless of temperature? A fish should not have to move long distances to eat a slowly swung streamer, so this is possible. The problem here is that neither Dan nor I have any interest in fishing when the daily high is below freezing (to old for this), so we probably won’t be testing this hypothesis any time soon. Is there anyone out there willing to fish streamers in very cold temperatures and during cold winter seasons and report back (Justin)?

Much credit for this change in my thinking and approach to winter fishing should go to Tim Pearson and his dedication to all things streamer as well as John’s obsession with targeting large trout, developing the Dirty Mop and giving me some for Christmas.
Posted by Nate 4 comments: