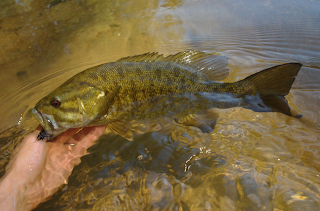 Fishing as a Dad

Last summer I fished like a mad man. This year, not so much. I'm working on his cast. 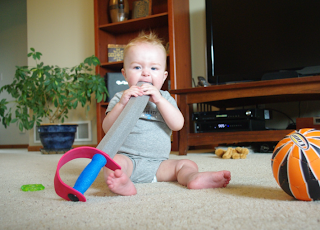 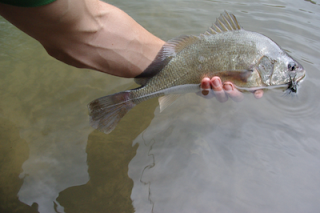 I'm in the middle of an August Iowa trip. After work last night I fished a pretty well-known pasture section of a pretty well-known wild trout stream. I was getting into fish pretty good with streamers when I noticed a bull in the pasture. This was a very large bull and he was not happy to see me. I very calmly and quietly walked downriver, hopped the fence and booked it out of there. I fished some other spots that are more marginal than the pasture and caught a couple of small fish. Some little fish were rising to a sparse BWO hatch and I caught a couple of fish on dries. Nothing special. 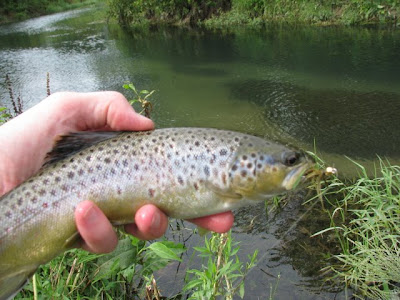 This AM I headed over to another creek. Here's a good story...So there I am rolling a scud and nymph along the bottom of a great looking corner pool when a large brown trout makes a perfect head-to-tail rise. As the fish returns to the water I think to myself, "wow, that was a nice fish". Then I think, "that rise was perfectly in line with my fishing line". Then I realize that on its return to the water, the fish is at a perfect 45 degree angle and heading directly toward my flies. Then my line tightens and it was on. Nice 17 (or so) inch fish. I was certainly in the right place at the right time. Right stream, right hole, right drift. 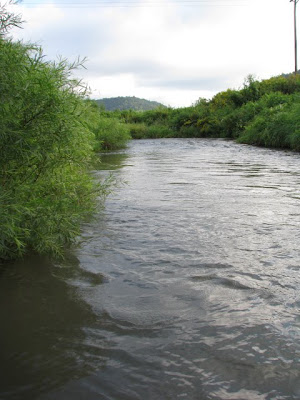 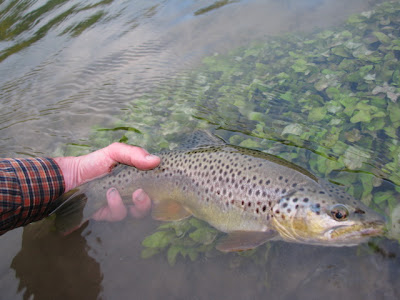 A couple of weeks ago I fished in Iowa with John. You can find some highlights here:
http://flyfishingwarmwater.blogspot.com/

Pretty much every river was blown out from recent rains, except two. And those two fished pretty well. There really is nothing like camping in the far NE of Iowa where your cell phone doesn't work, and you are surrounded by steep bluffs, farms, and trout streams. The camping is also free, which means you can pretty much set up shop along any stream in the area. So easy, so good.
Posted by Nate No comments:

That one trip when Dan got a fly stuck in his nose.

On a 'family' fishing trip I met up with a good ole fishing pal Dan H. Dan has fished with me for years, going back to Grad school, moving through me have my first kid on my back, to now both of us having kids on our backs. Here are the pics and short narrative to describe the antics. 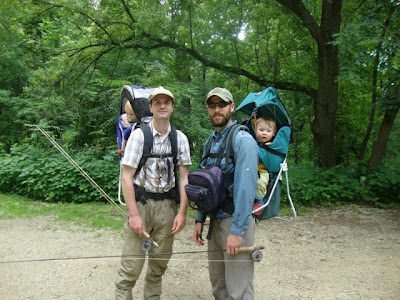 Here we are all loaded up and ready to go. With any luck both kids will be asleep in half an hour. 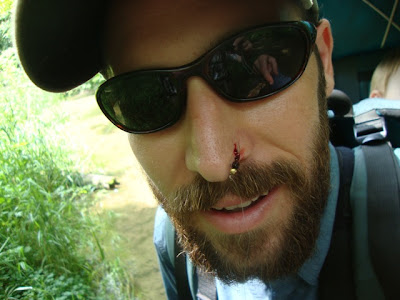 Ok, so not long into our adventure Dan catches a trout. I come over to show it to Sam because he likes to touch them. Dan holds up the fish so both kids can see it, fish flops and somehow lodges the second fly (Dan was fishing a two fly rig) into Dan's nose. Great. 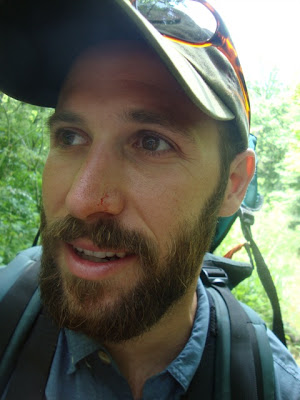 Although the fly was stuck in past the barb, we got it out using the grip-it-and-rip-it method. Here is a youtube video of the technique:
http://www.youtube.com/watch?v=sKAAGWZskGg&feature=related
I learned it when a friend had to remove a hook from my finger one very cold November day. Remember that Snus?
Anyhow, it barely left a mark. And we were back fishing again. 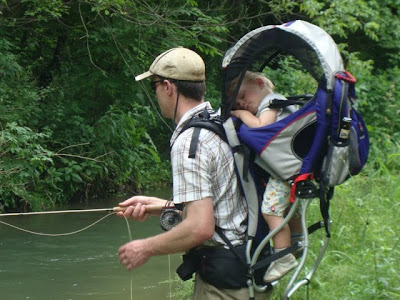 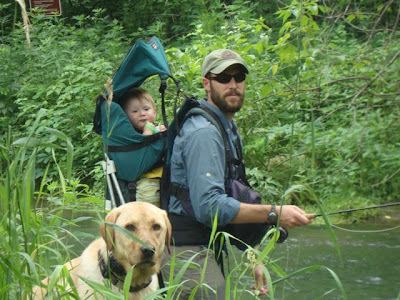 Look at this handsome family. 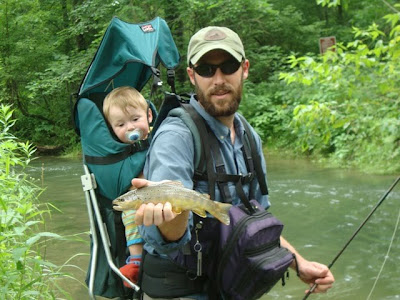 We went on to catch a few fish that day. No monsters, but a solid couple of hours of fishing, with one memorable fly-in-the-nose.

This seasons flows on the Black River 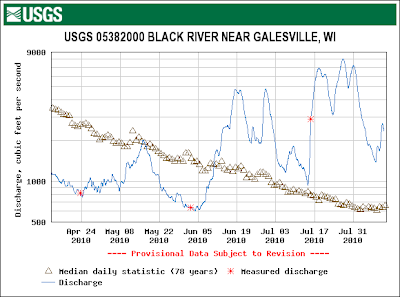 It has been a rough season on the Black this year. Things started out great in April when I was sight fishing for Gar when the water was low. I spent most of May trout fishing, which in hindsight blew most of the opportunity on the Black. Since the peak flows in mid June I've been out only a handfull of times (during the lows on the graph). But even then the water is still higher than I'd like. I want nothing more than to gar fish tonight, but it doesn't look like it will be worth it.

A while back some soulless bastard decided that he or she deserved my canoe more than I did, and took it. My canoe wasn't expensive, but it was the ultimate river canoe, 14.5 feet long with two seats for plenty of people and gear, but still small enough to solo paddle without much effort. It didn't track particularly well, but I got used to the way it floated me from place to place. There is a certain grace to canoes that kayaks, with their nimble and speedy nature, can't match.

I purchased a kayak recently, to replace the canoe. I did this on the premise that I will one day buy another canoe. But for now, a kayak would be a nice option. For one, I needed something that I could carry up and down the hill to the river easily (since I won't be storing it down there anymore). Secondly, I rarely take anyone out fishing on the river with me, so I don't really need the extra space.

After much thought and consideration, I purchased a native 9.5. Now if you read online about the native 9.5 you will get the impression, as I initially did, that this is a kids kayak. I was impressed by its open cockpit and size (9.5 feet and 40 pounds). After speaking with some gearheads in Madison and Minneapolis, they assured me that the 175 pound maximum weight limit was overly cautious and that although they were marketing the boat for kids and small adults, it had plenty of stability. 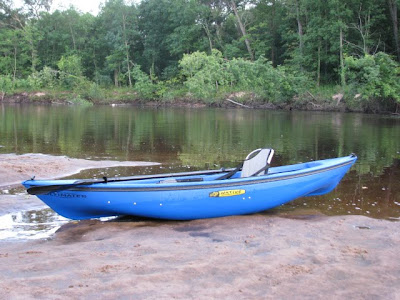 Already at Home on the Black!

So far so good. It has bit of a wobble to it when you first get in, but the secondary stability is good. I've fished out of it a couple of times now, with modest success. It is extremely quick and responsive compared to my old canoe. As I mentioned earlier, I had gotten used to the way the old boat used to glide around. This boat moves quick, which means that you pass over some fishing spots a bit too fast, but it also means that you can get back to them easily. I think I just need to get used to this feature.


Perhaps the worst design flaw on the boat, and probably the worst feature I've seen on any boat ever, is the lip on the side of the boat. The sides of the boat wrap around in a U shape, making it impossible to get all of the water out of the bottom of it. You have to unscrew a little port on the top of one of the sides and let the water drain out of it, which takes way too much time and effort. Perhaps I'm missing something here, but this seems ridiculous.

Another ridiculous feature is the seat. It is ridiculously awesome, rivaled only by my Herman Miller Aeron chair at work. 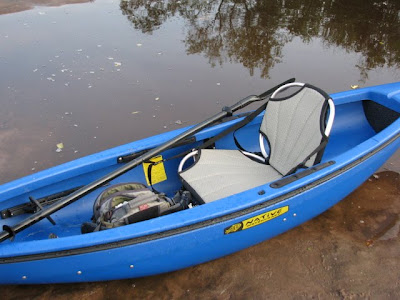 Some quotes from a nice article by David Brooks:

A 24-year-old can’t sit down and define the purpose of life in the manner of a school exercise because she is not yet deep enough into the landscape to know herself or her purpose.

Life comes to a point not when the individual project is complete but when the self dissolves into a larger purpose and cause.