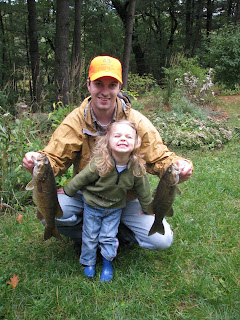 With this last warm water photo of the year, I hereby acknowledge Johnny Rotten as the champion of the warmwater fly provocation. John caught more species on the fly rod this year than I did. John led for the entire summer by at least 1 or 2 species. I learned that although the Mississippi River has a ton of species that could potentially be caught on the fly. It is difficult to get them to bite anything but bait. Also, you have to spend time on the water in search of some of these species, and I just didn't put the time in that I should have. All excuses aside, John put up one heck of a fly-fishing year. He not only caught more species, but he caught a ton of really nice smallmouth from some unknown streams. That's what it is all about-figuring out something new. I will be purchasing John a Pizza Ranch pizza and some beer for his efforts.

I consider the highlight of my warmwater fishing year to be catching two really large largemouth bass from the Mississippi River backwaters and then getting a nice smallmouth from the crow wing river up near Brainard, MN. From this season I have concluded that I like catching bass, I like the active nature of the fish and the methods that will take them.

I think the John's quillback might be the overall fish of the year. It was a species I didn't catch, and it looked really nice.