The Roach river flows for six miles, starting at a dam on First Roach Pond at Kokadjo, Maine to Moosehead Lake. Moosehead lake is the largest body of fresh water entirely contained within a single state, so I'm told. Said lakes holds Lake Trout, Brook Trout, and Landlocked Salmon, to name a few species. Of these, the brookies and salmon ascend the Roach to spawn each fall, making them accessible to the willing fly fisherman. The Roach river is fly fishing and catch and release only.

Under normal to low flow conditions, I'm told that the Roach is considered a small river, easily fishable with a 4wt rod. Along the six miles of river, there are 12 'pools' in which most of the fish congregate during a typical fall. These pools can be nymphed, fished with streamers, or with a dry fly if the situation calls for it. The rest of the river is strewn with boulders and I think typically too shallow to hold a lot of fish. I could be wrong about this because I fished the Roach last week (late Sept) under very high flows. The high flows seemed to spread fish out a bit, and made it impractical to nymph given the faster water and boulder substrate, it seemed I was either hung up on a rock or floating along the surface. It didn't matter, because under these conditions, you'd be a fool not to be swinging a streamer. 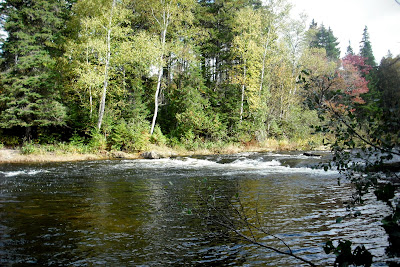 I believe the locals call this the ledges. It was the best holding water I found. It was sweet. 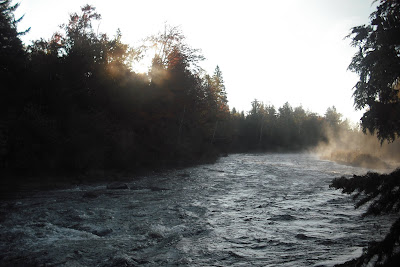 First light on the Roach River. Most of the river looked like this, strong current, fish holding in the softer water (not shown) 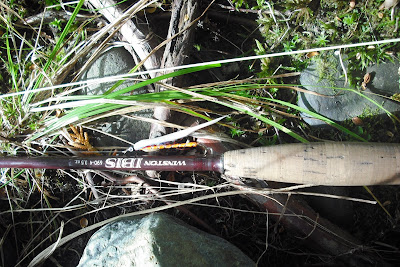 I took a rental car from Bangor up to Greenville and stopped in at Main Guide Fly Shop. There I got some helpful tips, a couple of flies and directions to free a campsite near the mouth of the river.

One of the flies I picked up is called the Shufelt Special. It is just a simple attractor streamer: orange body with a white wing. It might resemble a brook trout fin, not sure, but it rocked.

In a day and a half of fishing I landed a dozen brook trout and one landlocked salmon, all on streamers and nearly all on Shufelt Specials. I lost a couple of fish on small soft hackles (suggested by the fly shop). The salmon didn't want its picture taken and flopped away before I could snap a pic. It was a good 16-18 inch fish. 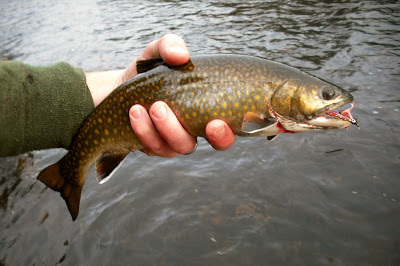 Most of the fish I caught looked like this:13-14 inches and fat. 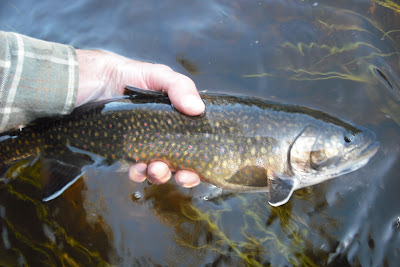 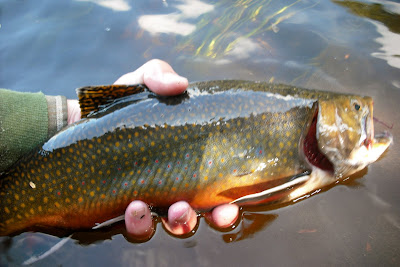 This was the fish of the trip, a big bright male brookie that took a streamer swung right in it front of its face. I am a bit disappointed that it didn't take a better photo. But that's how she goes. I landed a couple of nice males in bright fall colors.

The Roach River is awesome. It is pretty remote and very hard to get around on, making it easy to find your own piece of water despite the fact that it is only 6 miles long with 12 pools. I'm not sure if I'll ever get back there, but if I do, I'll spend a lot less time searching for water and much more time fishing.
Posted by Nate No comments: 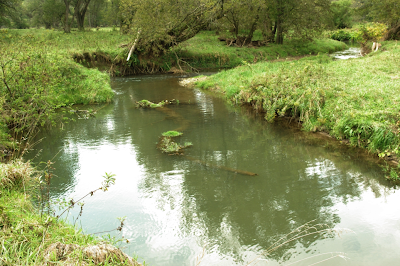 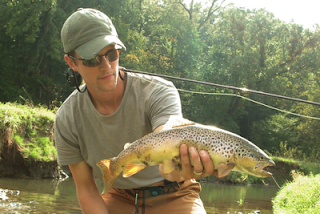 The snake tree pool. I missed a big fish here in April. This could be the same fish. I'm convinced it is. This pool is such a great "big fish" home. It's not the easiest to fish, a high bank on the left is the best shooting point. The high bank leaves you with a sagging line which can often impair a hookset. I made a dozen casts on the left side of the snake tree. Started with a quick retrieve and then some slow deeper retrieves. Nothing... Was about to head to the next run when I decided let's throw one over the snake tree, if I hook up I'll have to run downstream to avoid getting caught in the tree. Sure enough, first toss over the tree and this beautiful brown comes out from under the tree and attacks the brown grizzly bugger. From 8 feet above the water the visual of seeing this fish come out from under the tree rendered me motionless for a second. Those big fish moments turn seconds into minutes. The image of the one I missed in April is still burned in my head but is now accompanied with a thankfulness for second chances. She was full of eggs and taped out at 20".

One thing could have made the fishing better this day. That's if I would have been sharing the exceptional fishing with a fellow trout bum.  The celebration of a nice catch is best with company and watching a friend catch a nice fish is sometimes better than if you'd caught it yourself. Good fishing is best when shared.

October is the start of deer season in Iowa, beginning with bow and muzzleloader. This is one of those spots where you may find yourself in the middle of a hunt. Happend to me last year and makes me weary about fishing this water until the Spring. A tough choice given the quality of fish in this section. 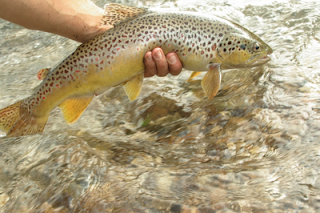 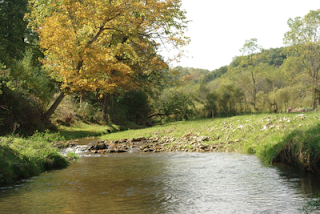 The fall trout fishing in the Driftless region is superb. I tossed a black & brown bugger all morning. The browns were hungry. 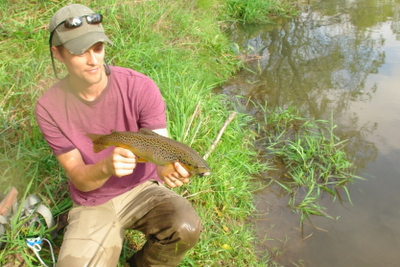 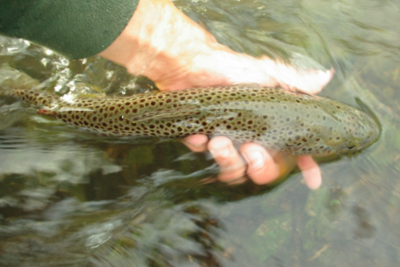 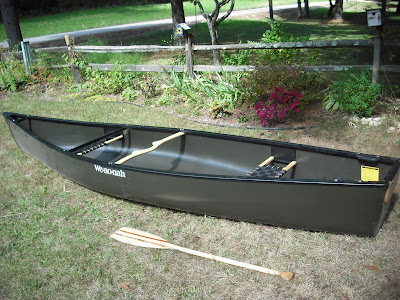 Today, I waited in line with some 50 other people staring at racks of canoes and kayaks before the start of Wenonah canoe factory's annual fall clearance event. I knew what I wanted, the Backwater 15, I just had to find it before someone else.

A few minutes before noon, they let us in and people started scrambling for boats. I found the sweetness and the deal was better than I expected, 65% off! It had one small ding, preventing it from ever being shipped from the factory. 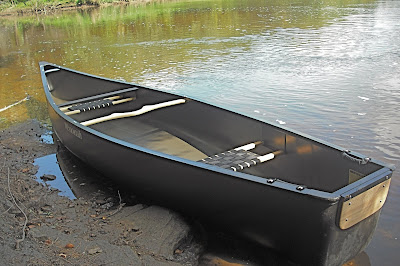 This is the perfect boat for me and my family. It is super wide and stable, no need for stabilizer floats at all. It is ready to be oared (with my outriggers), paddled, or motored. It isn't the perfect canoe as it is a bit wide. Plus, because they designed it for use with a motor, the rear seat is farther forward than a normal canoe, which puts you farther from the gunwales and makes for a somewhat awkward paddle stroke. It also isn't the perfect boat, as it is too small for a very powerful motor. But it is perfect for me. I won't be taking it to the boundary waters, or out on big lakes. I'll be taking it on the Black River and the Mississippi River backwaters, with oars, paddles, or a motor.

I now have room for a 5 foot long gar!

Sale ends tomorrow (9/24), so you better get over to the Wenonah factory in Winona, MN. 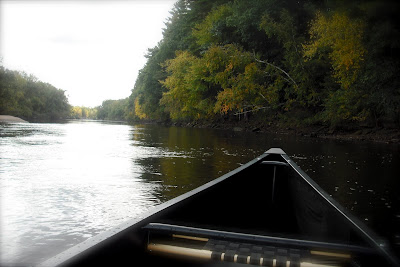 If fishing a tandem rig and fish takes top fly it is ill-advised to try landing fish with hand. The lower fly may end up under your skin. In-fact there is a good chance it will if dealing with a feisty fish. I don't own a large net and when fishing for carp I typically beach them. The weed jungle wasn't offering a landing pad. Lesson learned. 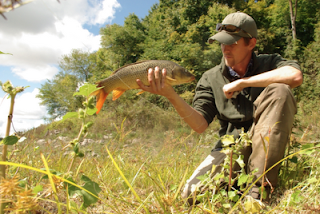 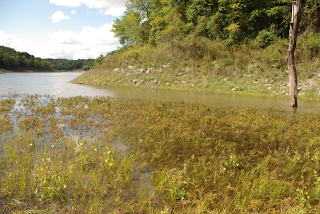 The picture of Dave fishing this pool says enough. 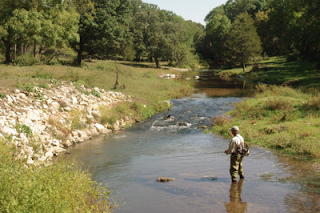 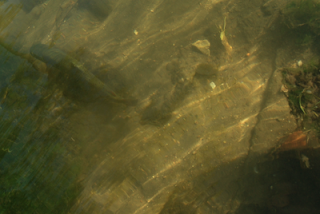 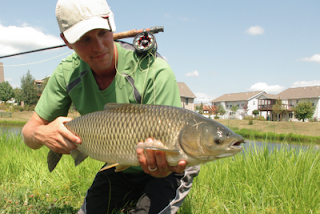 Grass carp are a spooky fish. You've got to see the fish and make a lucky perfect cast that doesn't send em running. I've regulated my attempts at these grassies to windless sunny sky -- any ripples on the water and I just can't see 'em. They don't root around like common carp so they're difficult to spot. Using my 4wt as delicately as I can. The only fly that's hooked grass-lips is still the pheasant tail nymph. 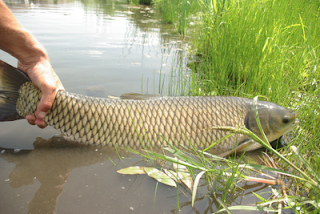