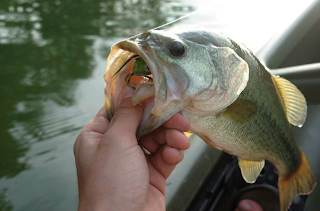 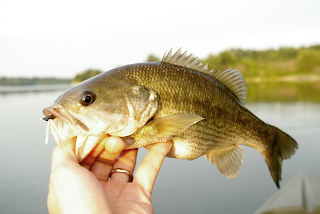 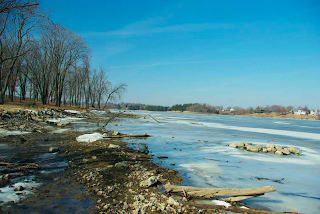 Spotted bass are common in the southern latitudes of this continent, and are not a native species in Iowa. This species was introduced into the Middle Raccoon River and Whitebreast Creek in 1963 from fingerling produced at the Lake Wapello hatchery. It is possible they still exist in these two streams, but there have been no recent identifications. In 1969 and 1970 spotted bass fingerlings were stocked into Lake Macbride where they have established populations that are reproducing. Spotted bass have been recently collected in Coralville Reservoir, and they probably exist in the Iowa River near the reservoir.

The spotted bass is a slender, streamlined-shaped sunfish with a large mouth, and the upper jaw extends slightly past the rear margin of the eye when the mouth is closed. The sides are greenish in color with darker mottlings and golden-shaded reflections. There is a broad dark continuous stripe along the side, but the margins of this stripe are noticeably more broken and uneven than in largemouth bass. This stripe may become indistinct in large fish or in fish from turbid water. The lower sides have spots arranged in distinct rows that form a series of horizontal stripes. The tail fin in young bass has a black vertical bar that separates the yellowish-orange fin base from a whitish fringe along the rear margin of the fin. The dark bar usually forms a black spot in the middle of the tail fin. The pyloric caeca of spotted bass are not forked, like those of smallmouth bass.

Spotted bass fry consume copepods and cladocerans, graduating to insects and eventually to fish and crayfish. Their habits are nearly between those of smallmouth and largemouth bass. Fish comprised 56 percent of the diet of spotted bass in some food habits studies. Other studies indicate spotted bass are not as predatory as largemouth, consuming about one-half as much fish.

Habits of the spotted bass are similar to those of smallmouth bass, except more secretive. Spotted bass spawn mainly in river tributaries and along rocky edges in lakes. They prefer rocky habitat for nest building, which are quite small in size, less than one-third the size of other black bass nests. Deposition and the development of eggs is comparable to that of smallmouth at about the same temperature. Sac fry schools leave the nest in 8-9 days and the male is quiet, attentive and protective.

I catch more Kentucky bass on Lake Macbride than regular largemouth bass. Spotted bass can tolerate warmer water which is likely why I catch em throwing poppers at the bank (anytime of day). This one is the largest I've caught - my guess is 14" as I didn't get a tape on it. The most obvious trait is the smaller mouth. I've noticed many have orange eyes, however, this one last night didn't.

I'm showing the early spring picture illustrating how my scouting paid off. The water level was down 8 ft for lake maintenence this past fall/spring. I caught this KY bass over this rock pile, oh yeah!

Here's a quick post of the recent action on my fishing trip to northern MN. I got a big smallmouth on a popper on the Crow wing river fishing with my friend John S. near Baxter, MN. I also caught a sunfish (I think), a walleye, and a crappie. The other pics are of me and my dad with some largemouths (fly caught) and my nephew Tyler with a Bowfin (not fly caught). We got into a bunch of pike, but I never caught one on a fly, some walleye (two on flies), and some crappie (one of a fly). I also had a perch to the boat but it got off just before I could grab it. 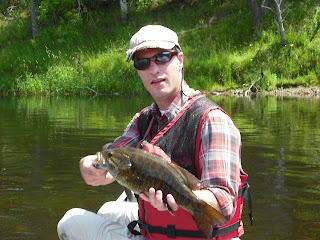 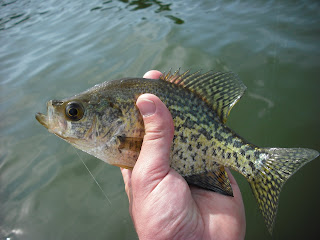 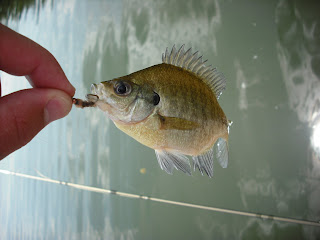 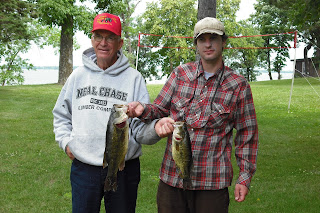 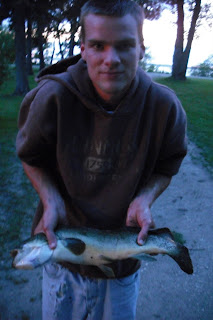 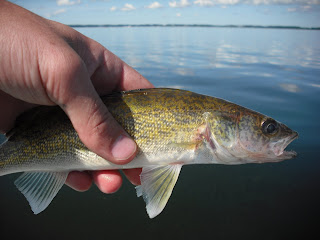 One thing this summer has taught me is that I'm good at fly fishing for bass but not at fly fishing for other species. I think this is true of other people as well and might be why fly rodding for bass is so popular while other species go over looked. It isn't that you can't catch these other species, it just seems like you only get small ones on flies, whereas the bait and hardware slingers boat the biguns.
I now have LM, SM, freshwater drum, gill, sunny, walleye, crappie-7
I think this makes us tied and I was inches away from a perch lead.
Posted by Nate No comments: 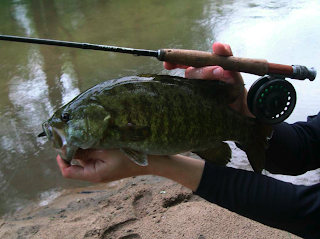 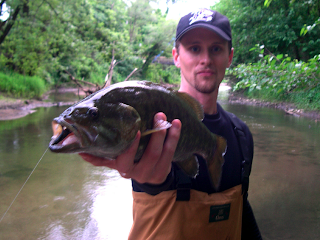 Caught this pig last night on a small feeder creek. My forearm was tired when I finally brought her to hand. I'm digging the 9ft 4wt I bought this year. Smallies rock. They pack so much fight compared to their bucketmouth brothers.

John
Posted by John No comments: 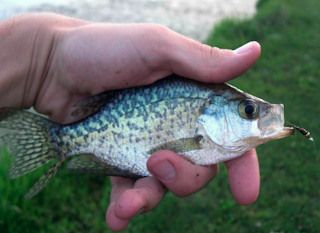 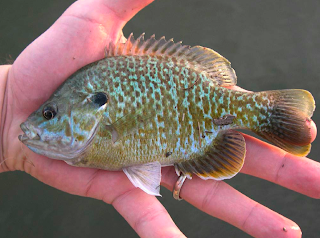 I thought I'd put some specs on the board. In part, to give Nate a feeling of urgency as he heads to MN for his family vacation. I had the crappie and Green Sunfish in my back pocket as I knew I could catch these guys at will. Just needed to trail a nymph under my popper. I likely caught 40 bluegill last night before I took the Green Sunny that I was looking for. Trailing a nymph under a popper is very effective -- if you want to catch a ton of small fish. The commotion of the popper attracts fish and the nymph is too much to resist for any panfish.

Rotten
Posted by John No comments: 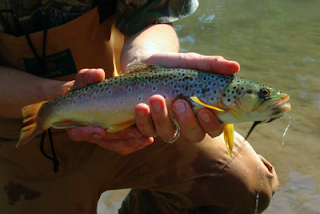 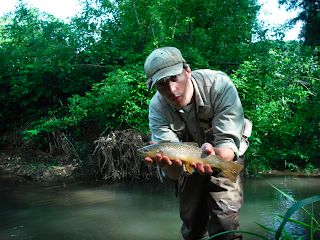 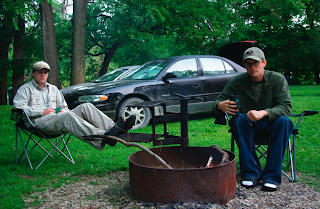 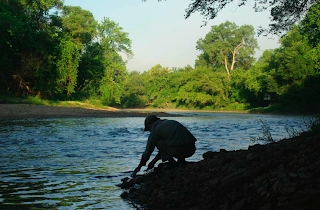 We fished a couple days over the holiday weekend. New water for us -- The Turkey, Sny Magill, and The Paint (in NE Iowa). Nate hit some waters in WI after I headed back home on Saturday morning. Some nice browns and a good time.
Posted by John No comments: