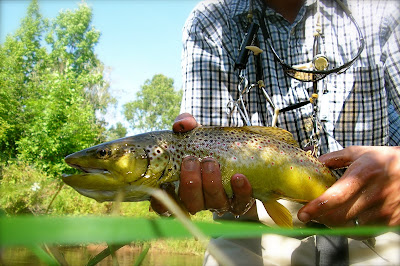 Is it possible that I've over-hyped terrestrials?


I pondered this question as I hiked the long path down into the valley of a relatively unknown trout stream. With each step more and more grasshoppers fluttered and jumped out ahead of me. These were the really big hoppers, some two inches long.

I've always had a thing for fishing terrestrials, ever since the first time I caught a fish on a hopper. Like most of my flyfishing successes, my first fish on a hopper was mostly by accident. I was fishing the meadows section of the Bois Brule river in northern Wisconsin during August. Soon I would learn that there are much better sections of river farther upstream for summer fishing. The meadows is deep and narrow, lacking the riffles and runs more characteristic of other portions of the Brule and of most good trout streams. Yet the gentle currents made it easy to fish a dry fly or strip a steamer. On this particular day I was fishing an indicator-nymph rig and on my first drift along an alder choked corner a nice brown came up and hammered my indicator. I can still remember the silhouette of the fish as it moved slowly out of the deep water and pushed its nose above the surface, then pulled its head down and away with my neon green foam ball. At times like these you wonder why one would get any sense of accomplishment from catching a trout. I replaced my indicator and nymphs with a big yellow hopper and on the first cast that same brown rose in the same way, taking it in its mouth and moving down and away again. It was a nice heavy fish that put up a fantastic fight. I landed it and snapped a photo (see above).

Further along my walk down to the stream I started to assess whether my interest in fishing terrestrials was at all justified by past successes. Had I really done that well on hoppers, ants, crickets and the like? The first year that I moved south to the driftless area I caught a number of trout on a hopper on an Iowa stream as late as October (see below). I am proud to say that it did not require a fish first striking at my indicator. 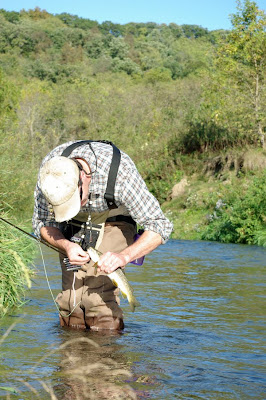 The next summer I fished ants and crickets as early as June and I caught fish, albeit small ones. Later that fall and the following one I caught a number of bigger fish (12-16 inches) on hoppers in late September in Minnesota. On one of those trips my son, Sam, came along. Of course I don't remember not catching fish on terrestrials because if they aren't working, I typically fish something else. In fact, that realization is probably more telling than anything. When fish are taking terrestrials, I fish them and I love it. When they aren't, I'm not, and I don't spend too much time thinking about it. But when its good, it is really good. It is the type of fishing most of us yearn for in the summer months. Tie on something big that floats and start casting. Let your mind wander, have fun.

I was still debating how often terrestrials have been effective for me when I reached the stream and tied on a hopper. My first cast missed the mark and drifted into some slack water on the inside bend. My second cast fell right up against the bank and a decent sized trout came out from the undercut and smacked it. I wasn't at all ready to play a fish and it ran itself directly into a mat of water cress and the fly popped out. That would turn out to be the fish of the day. It was fitting. 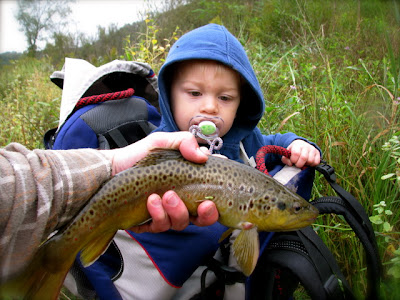 The stream I was fishing was small and shallow. The last time I had been here was two years ago with my daughter, Halene. At that time, we were mostly hiking and scouting new water. That was August and we did manage a nice-sized brown on a hopper then too. Now I worked my way up through a pasture section taking several 10 inch trout on a hopper. As the sun dropped below the bluff to the west, the fish turned on. For about a half hour stretch the little trout were racing each other to reach my fly. I had one fish that was bigger come up and miss my fly on the first pass and then take it on the second pass through. I lost that fish.

Its ironic that I spent so much time reevaluating the effectiveness of terrestrials on my walk to the river, to then simply test them out for a couple of hours after that. The fishing was good. The river was small and so were the trout. There were a couple of nicer fish that I lost, but this was a typical small-trout river. On my walk out, I refined my thinking on terrestrials by recalling where and when I have had success fishing them. For the most part, it has been on small streams like this one, where the fish are 100% aware of everything going on around them. It has been in runs that are shallow enough to require only a small burst of energy from the fish to rise up and grab the fly. Perhaps this is why I've taken some nice fish on terrestrials in the late fall on some of these really small and shallow streams. As bigger fish start to move upriver into the shallower gravel runs, I think it is pretty easy to aggravate them with a big yellow hopper. The stream I visited on this particular night will be a perfect place to test that notion in a month or so. 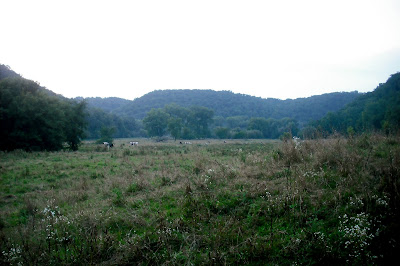